Two New Prints: “Fovea” and a Name Too Long to be Tweeted

The end of another semester, one started out with a rash of missed classes because of crazy winter weather, but slowly managed to unfold into a pretty successful time, if stressful. So to celebrate the end, and to enjoy a nice clean press room thanks to my Extension School students, I ran a couple of projects, both of which had been simmering on the back burner for some time.

The first is the print “Fovea”. This is a three-color letterpress piece done on Lettra 220#. A fovea is the central portion of the human retina, where the photoreceptors crowd very close together to give you detail color vision. This is a representation of the pattern of color-sensitive cones as they cluster in the fovea: 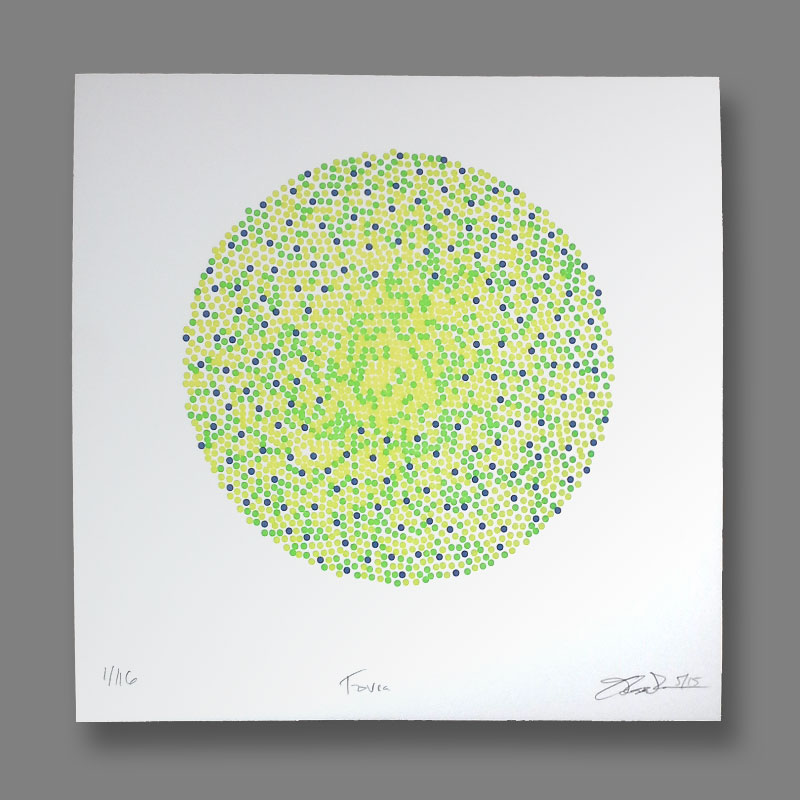 There are three types of cones in the human visual system, the L, M and S cones, also known as the red, green and blue cones. However, it’s not so simple as that; for each of the cones I’ve used an ink color that closely resembles the color that elicits the peak response for that cone. So the red and green cones are close together in peak sensitivity, at yellow-green and green (technically, 564 and 534 nanometers), while the blue cone is offset quite a bit, at a blue tinged with purple (420 nanometers). Also note how there are lots of M and L cones in the fovea but much fewer S cones, and none at all in the very center. That’s because the human eye uses blue light strictly for color information and not for detail. This print is editioned in a set of 116, and is for sale for $150 each.

The second print has a very long title, because the image is a somewhat opaque scribbly-looking circular pattern and I wanted to lard the title with as much information as possible: 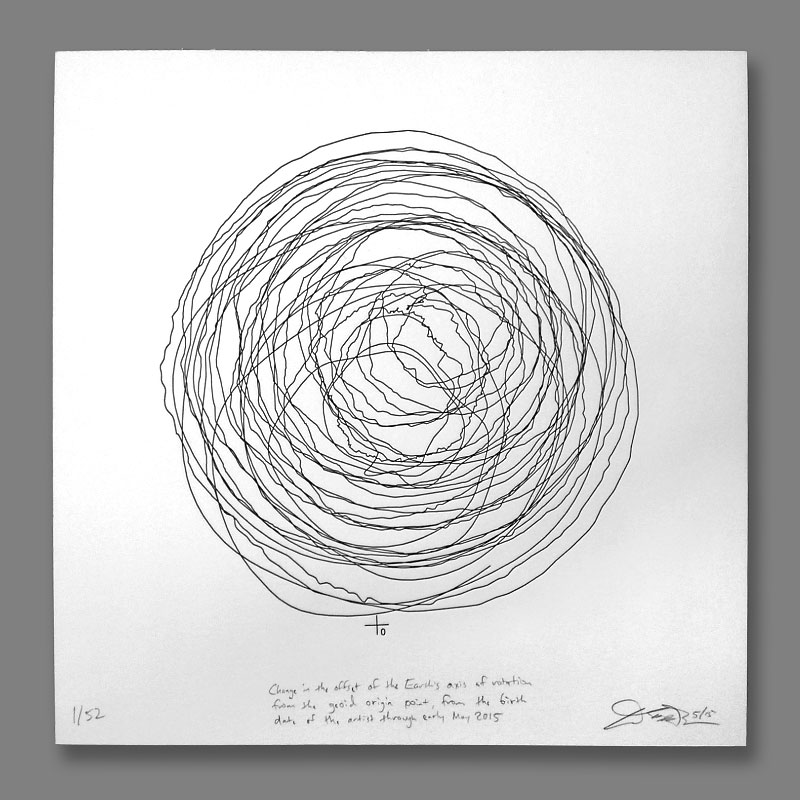 As you may see in the image, the title is “Change in the offset of the Earth’s axis of rotation from the geoid origin point, from the birth date of the artist through early May 2015”. You may or may not have known this, but the axis of the Earth’s rotation is not fixed in space, it wobbles around and points in slightly different directions over time. There exists a scientific agency dedicated to following this wobble, as it has ramifications for leap seconds, GPS, navigation, core studies, earthquake analysis, and other earth sciences. I was able to get the (x,y) grid data for the location of the axis from 27 November 1971 through May 2015 and turn it into this into a circular scribble, with the geoid reference point for the “north pole” indicated by the +0 located on the bottom of the print. The motion of the rotational axis is affected by seasonal changes, ice cap capacity, magma currents in the mantle, convection currents in the core, and interactions with other planets and the Sun. It is interesting to note that while this wobble does have a random component, it exhibits a regularity over a 14-month period.