Most people who know my practice know that I pretty much mess around on the computer and rarely put pen or pencil to paper unless I’m doing a quick cartoon to calculate angles or just to get something down in physical form. Well, this summer I taught The Book As Art, a summer school class at the Bow & Arrow Press, and one of my students made me two lovely stab-bound sketchbooks as a thank-you. (You can see the video she made of the Press here.) So, basically, I felt that it would be a shame to let something like that go to waste.

Back in the day I used to make long rambling doodles when I was bored in class or at work, like most people will. So I figured, why not try those again? Maybe, given repetition and some experimentation, they’d turn into something interesting. From what I understand, that’s the way sketchbooks are supposed to work, right? But, knowing me, I have to have some sort of concept involved, some sort of boundary to push against. So I decided I would do my rambling doodles, but I would limit myself to only sixty strokes, defined as how long the drawing tool stayed in contact with the paper, regardless of length. Sixty is a nice number, not too long, not too short, and can be subdivided in multiple ways should the need arise.

For drawing material, I decided there would be no limit, I would use whatever implement I found in my backpack that looked interesting. So I used ballpoint, pencil, giant marker, and Sharpies in various colors. I also decided I would try to do one a day, and since the books were made from folded sheets so that each “page” was actually two-in-one, once I reached the end of the book, I would turn around and do the other side of each page. It turns out there were fifty pages in the book, which means one full book will be exactly 100 drawings. Nice!

As it turns out, the once-a-day thing didn’t really work out, for various reasons. Being busy was one, forgetting was another, but I also found that doing one per day did not really allow drawing concepts to be explored in depth while they were fresh. So it kinda worked out that I did seven drawings every Thursday, which gave time to play with ideas and develop at least one of them. You can see some pretty clear progressions at different points in the book.

About two weeks ago I made it to the end of the first book, which was the perfect time to document the drawings and publish them here. I wanted to photograph them without drawing on the other side of the page, because the pages are somewhat translucent and I wanted these first ones to stand alone. So, it took me a while to get around to shooting the pages, and the first run looked crappy so I had to reshoot them, but I think I have something worthy of presentation. A small PDF of the drawings is available here. And I’ll post six of my favorites below, for ease of viewing. 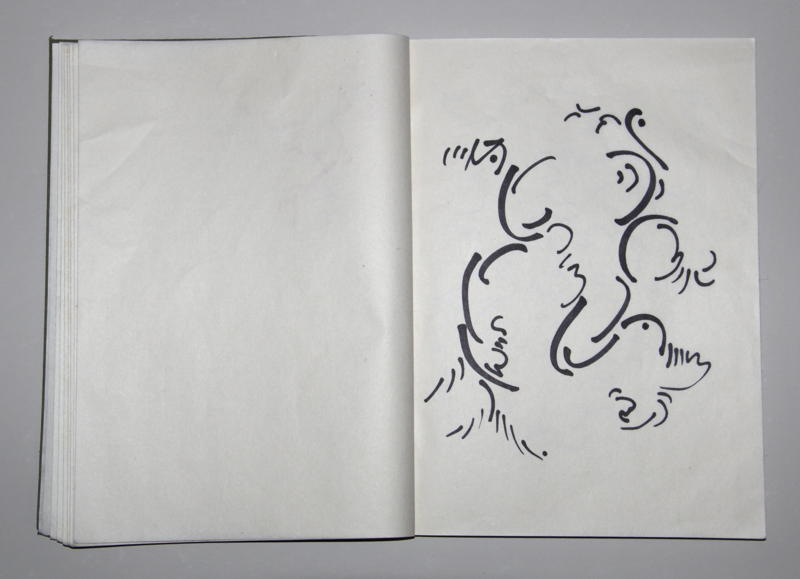 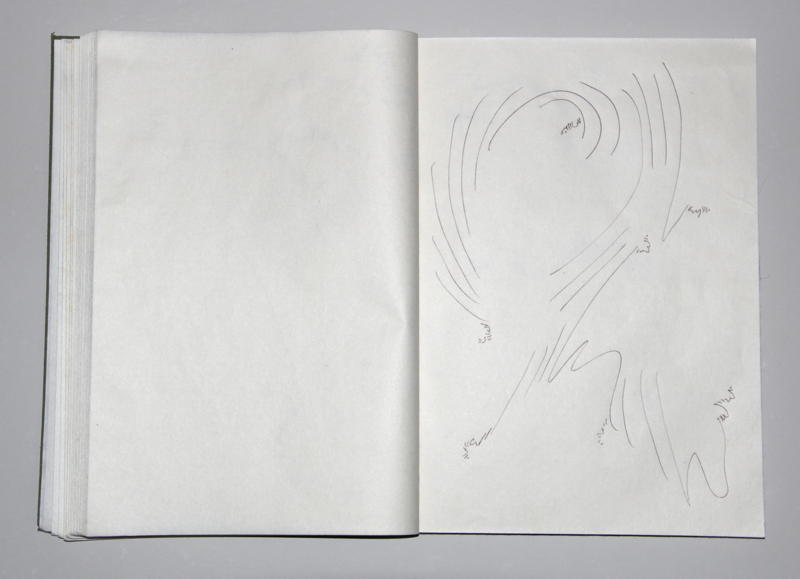 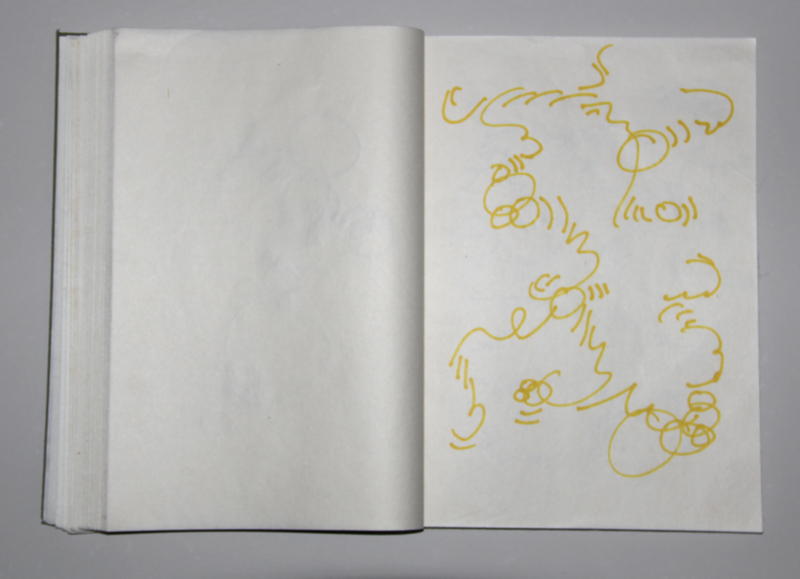 ^ #26, an early form of my circle/square/triangle experiments, in yellow Sharpie 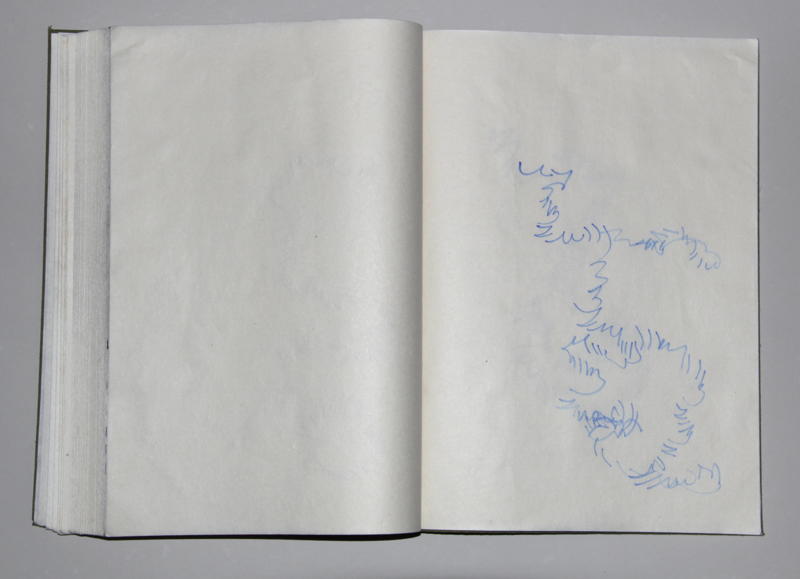 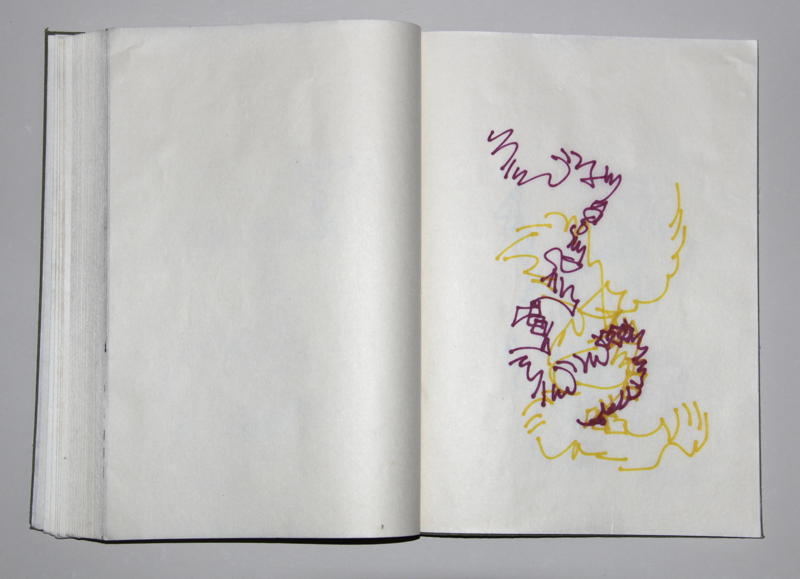 ^ #45, maroon and yellow Sharpies, with a nice interaction between them turning red 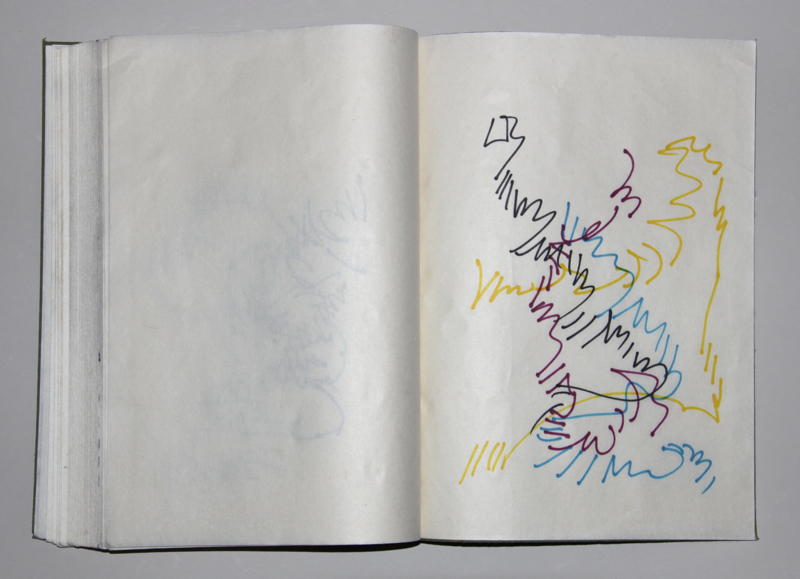 ^ And #50, a CMYK Sharpie composition with the black and magenta done blind.